One of my favorite trips this summer was a trip I made to Orcas Island, one of the San Juan Islands in the Puget Sound. We aimed for Moran State Park, sure to find good beaches, trails, and campgrounds. We did, but we also found something else: a historic mansion tucked along the coast, known as the Moran Mansion. The mansion was built 1906-1909 by Seattle-based ship-building tycoon, Robert Moran, upon his 1905 diagnosis that he had one year left to live. He went on to live nearly another 40 years (he lived from 1857 to 1943), but not before buying and then donating vast amounts of land on Orcas Island to create what is now Moran State Park. 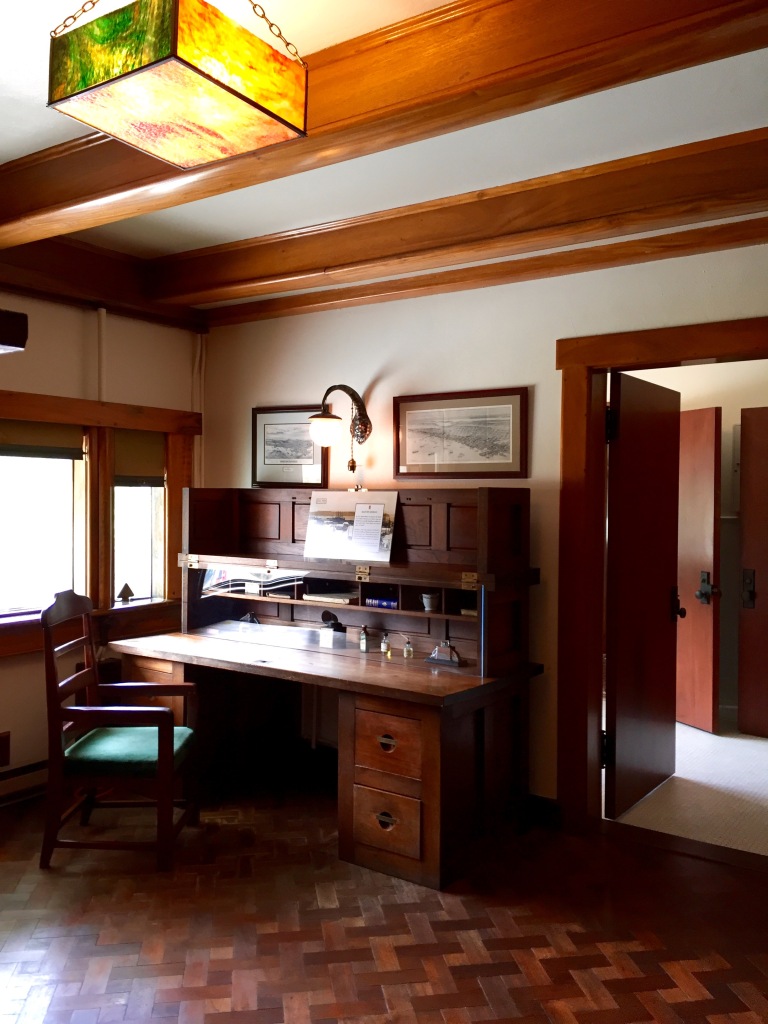 Robert Moran is the reason that you can find this extensive and very early state park (rumor has it, he was inspired by early encounters with preservationist John Muir). He is also the reason that, on this remote Puget Sound island, you can see some beautiful examples of art glass, including a number of pieces done by Tiffany Studios.

The decorative glass of Louis Comfort Tiffany is so well-known for his glass work that art glass lamps have been named after him (the “Tiffany lamp”). His work has been in such places as the White House. And he was hired by Robert Moran to make a number of glass pieces for the Moran Mansion.

The Moran Mansion reflects many design ideals of the Arts and Crafts period, including the use of art glass. A long, art glass window depicts the harbor in Antwerp, Brussels, a painted and etched piece by Louis de Contini of Brussels. The stained glass chandelier is attributed to the Tiffany Studios based on documented correspondence. Each panel represents one of the arts and the poem “Opportunity” (John James Ingalls, 1894) appears on one side.

The Moran Mansion is now the Rosario Resort and Spa, but the second floor has been preserved as a house museum and visitors are welcomed up to the second floor to look through the rooms and hear weekly organ concerts throughout the summer months. I highly recommend stopping by if you’re on Orcas Island! I also recommend climbing the CCC tower on Mt Constitution (also pictured here). Trust me, it’s definitely worth the ferry ride.

The Rosario has a nice page about the history of the mansion and their current museum. This includes some historic photos of the interior and exterior.

History Link has an article about Robert Moran, focusing on his time as the mayor of Seattle.

I previously wrote about Tiffany here, with a focus on the beautiful art glass ceiling in Chicago’s Macy’s department store (you can still visit it!), as well as the connection between Tiffany’s jewelry, lamps, and ceilings.

The article “Red, White, and Tiffany Blue,” goes into some more detail about Tiffany and includes a painting of what Tiffany’s walls are thought to have looked like in color (photographs at the time were only black-and-white, and the wall no longer exists).